On Wednesday 5th of September 2018, the EA Rotterdam group had their fifth reading & discussion group. This is a deeper dive into some of the EA topics.

During the evening we discussed how the different concepts of Effective Altruism relate and how they influence each other. We looked at the different cause areas and possible interactions between them. Questions we discussed included: Will my giving towards ending factory farming also help reduce CO2 outputs? Does investing in rationality have a positive impact on all other causes?

We (the organisers of EA Rotterdam) thank Alex from V2_ (our venue for the night) for hosting us.

If you want to visit an EA Rotterdam event, visit our Meetup page.

Effective Altruism (EA) wants to solve the world’s most pressing problem. And much of the work within the community goes towards solving these problems. But sometimes you have to take a step back and see how they interact and how they relate. Does working on one problem make things worse for another, or does it actually help solve other things you weren’t aiming for initially?

EA is quite a broad movement and views on ‘the most good’ differ among many of the followers of EA. In this follow-up article, I try and highlight what seems most important to each area and then I will highlight the back and forth interactions we discussed during the evening.

During the evening we produced two maps. 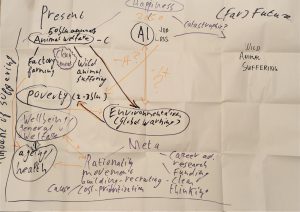 The first group made a distinction between the present and the (far) future. They linked many of the well-known concepts in EA and showed how the ‘Meta’ parts of EA influence them again. 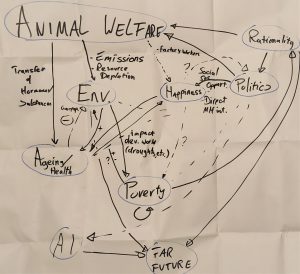 The second group started with Animal Welfare and mapped with that as the basis. They were able to link most concepts but saw that AI and Far Future didn’t have many links (yet).

Based on the information above, I started working on a systems map of my own. I don’t have it draw out (but feel free to make one based on this information). We will also use this information and the above maps to make a V2 (get it) of the maps in a few months time.

Animal Welfare is concerned with improving the well-being of nonhuman animals, especially farmed animals. A well-known organisation that compares different effective charities in this area is Animal Charity Evaluators.

Despite its importance, this focus area is highly neglected: animal charities receive only 3% of charitable donations, and 99% of that money is focused on pets, who make up less than 0.1% of all domesticated animals (Reese 2016).

The positive side-effects: If there are less factory-farmed animals, there will be fewer people who will be employed in these areas. The jobs in factory farms are not good (source). These are some of the lowest paying jobs, and may even result in people experiencing PTSD, depression and being more aggressive at home (source, 2, 3, 4). I would be curious to know how large this effect is (back of the envelope: 500k workers in USA, 50% injured, 70% respiratory problems – but what number is prevented per $ donated?).

If we eat fewer animals, then we can use land much more effectively. Grains that still have to go through an animal have a 9:1 ratio (source). We use 10x the amount of fossil fuels for making a calorie of meat than the average of an agricultural product (source).

The negative side-effects: If we switch away from factory farms and towards cultured meat (see below) or more grains/legumes/etc, will this disrupt many farmers? Will they be able to switch?

Notes: One of the sub-areas of animal welfare is the development of clean meat (or cultured meat, meat without the animal). I believe that once we have a viable alternative to farmed meat that will be widely accepted (and I hope this is it) then I also think that we will become more compassionate to nonhuman animals. The previous arguments about the climate still also stand of course.

ABC HERE MY CONCEPTS AND LINKS

Before we made our systems map we became aware of some other maps from others in the EA community, here are some of them:

Want to join us for another evening? Feel free to come over and bring a friend! Please check out our Meetup Page.

Our next in-depth meetup is titled Poverty and Climate Change (please join us: Event Page)