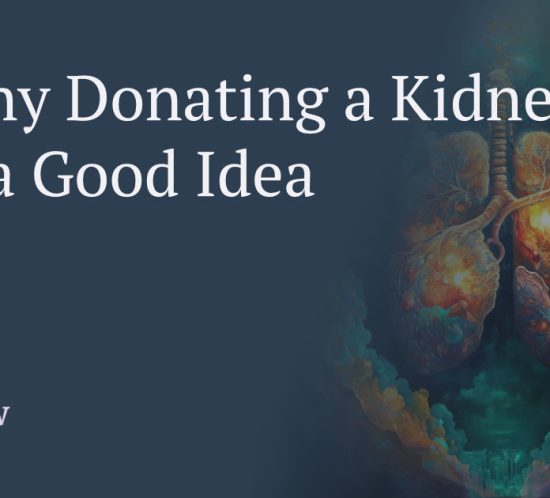 See the English version of this article with sources and footnotes

Why Donating a Kidney is a Good Idea

See the Dutch column version of this article

It’s been seven days* since I donated my kidney, and I feel like my old self again. Sure, I have a scar of about 10cm around the waist. I’m not running a marathon yet, but I feel entirely normal besides that.

If you’re not afraid to suffer a little uncomfortableness, I’m here to convince you that donating a kidney is not a big deal – and a massive deal for someone else at the same time.

By donating my kidney, I’ve given someone a second chance at life. His** kidneys were failing, so his life was cut short. Though dialysis can partially replace the function of a kidney, the process of being hooked to the dialysis machine every second day significantly reduces someone’s quality of life.

A new kidney, from a living donor, will last for an average of 22 years. Kidney transplants are regularly done, and 98% of them are successful.

In short, donating a kidney gives someone another lease on life.

There are currently over 800 people waiting for a kidney in the Netherlands, waiting an average of two years for one to become available. If they don’t receive a kidney, dialysis is the only option. Of those waiting, 8% die and 14% see their condition worsen to a state where a transplant doesn’t make sense anymore.

The potential risks of donating a kidney

When I initially shared the news with my mother, who is retired and had been looking forward to becoming a grandmother, her reaction wasn’t exactly what I had expected. Instead of being overjoyed and grateful, she was taken aback and expressed discomfort with my decision to donate a kidney.

“Don’t you need the kidney yourself? What if someone close needs a kidney?” were two typical reactions I got when telling others about my plan to donate.

The answer to the first question is a resounding no. Kidney donors, on average, live the same length as other people. There is an increased risk of end-stage renal disease, but the chance, measured over 15 years after donating, is lower than 0.5%. And if things go wrong, I’m automatically prioritized on the waiting list.

If someone close to me needs a kidney, they are not getting my other one. But the chance of them getting a kidney transplant is 1 in 18000. In other words, there is a tiny chance that someone I know personally will need a kidney. Even if they did, there is a big chance that I wouldn’t be compatible with them.

A third cost is a chance of dying during the operation itself. The chance of dying on the operating table, from data between 1994 and 2009 is 1 in 3000 (I’m mentioning the dates as it’s probably overestimating the risk). This is roughly the same cumulative risk you would incur by riding a motorcycle for 3000 km.

The actual costs of donating a kidney

The hospital doesn’t cut out your kidney without knowing with certainty that you’re healthy enough to donate.

I visited the hospital six times before the operation, two visits which lasted multiple hours, the others being a quick in and out for a blood test or scan. As I live in the same city as the hospital, the total duration of the visits was less than two full working days.

The day before the operation, I got my own private room with a view. There was some nervousness, but for the productivity obsessed, I was able to work through the afternoon which was only interrupted by taking some blood samples and inserting an intravenous catheter (for pumping fluids into the blood circulation to get the kidneys hydrated and active).

During the operation itself, I was under general anaesthesia so I can’t report much there. When I woke up a few hours later, I got an ice cream (‘raketje’) and after half an hour of coming to, was wheeled back to my room.

What surprised me most was the lucidity I felt after the operation. I was on pain medication, and my girlfriend said I did sound a bit high. But I could voice message friends that I was doing well, and after visitations spent the rest of the day watching Netflix and listening to an audiobook.

Around four times a day, a nurse would come by and take my vitals and ask about my pain level. I received two slow-release morphine tablets (the first two days), four oxycodone tablets (lasting about six hours), and two aspirins three times a day for the first three days.

The first two days the pain level reached an eight, both times in the evening when I was trying to get to sleep. But this was all manageable with the oxycodone, and I slept relatively well. By the afternoon of the third day, I’d taken the last of the aspirins and hadn’t needed more painkillers since.

By the morning of the fourth day, I was in a taxi driving home.

The experience of others may vary. I’m in exceptionally good health, do sports most days, and deadlifted 200kg the week before the operation. This is just my experience, which was less burdensome than expected.

A week after donating, I feel the scar tissue around the waist, mainly after walking longer distances. I have to be careful when straining my core (e.g. getting out of bed), but that is about it. I’m not allowed to lift heavy weights for the first six weeks. I’m walking the dog, hanging out with friends, and back in the office again.

Before I forget, the intravenous catheter isn’t the only one set. You also get one that goes through your private parts which is removed the following morning. And yes, this hurts intensely for a few seconds, but less so than getting kicked in the balls.

Donate a kidney if you can

I’m happy that I’ve donated a kidney, as are most donors. I will live a normal life without limitations. I even get a yearly health check for free. Someone else will get two decades of life back***.

The costs were worth it, for me.

I can’t reach through the screen and tell you that the calculation makes sense to you. There aren’t many people who made the same calculation as I did. There are about 500 living donations in The Netherlands per year. But if you’re thinking about donating, to a person you know or altruistically, I hope my story has helped make that choice easier for you.

*The first draft of this article was written seven days after the operation. Now – a few weeks later – I can report the situation is still good. I’ve caught the flu and did take a week to shake that (vs. normally never getting the flu, but no fever, only coughing). Another person I’ve spoken to had a longer recovery time (constipation for a week, feeling tired quickly for two/three weeks, but lower pain levels)

**My kidney donation was anonymous, meaning I didn’t get to meet the person who received my kidney. I do know that it’s a man who had multiple people ready to donate but who didn’t match his blood or tissue type. I didn’t match his blood type but it was a perfect match on the tissue values. Donating through the blood type means that more antibiotics must be given. On average, the success rate is the same.

***In some cases, you might be able to start a chain of donations. Meaning that you donate to someone who has a non-compatible friend/family member who will then donate to someone else who’s on the waiting list (some donation chains can be up to six people).

99% of kidney recipients are alive after one year in the UK. The average function of a living kidney is 20-25 years, but up to 60 years of success have been reported – NHS